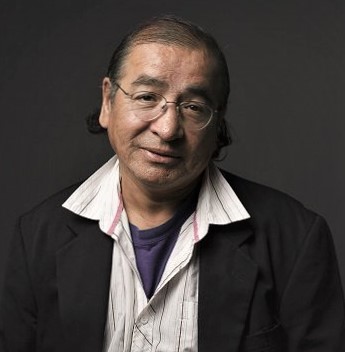 Tomson Highway is a Canadian novelist, pianist, children’s author, and playwright. He is notable for his play Dry lips Oughta Move to Kapuskasing and The Rez Sisters. Both plays won the Floyd S. Chalmers Award and the Dora Mavor Moore for outstanding new plays. His autobiography Permanent Astonishment won the 2021 Hilary Weston Writers’ Trust Prize for Nonfiction. He was among the guest artists to play at a Canadian national commemorative ceremony to honor Queen Elizabeth held at Christ Church Cathedral in Ottawa.

Highway attended Indian Residential School, where he learned piano and English. He has produced plays and novels that have earned him recognition in Canada and internationally.
He published his first book in 1986, The Rez, which won several production awards in Canada. Tomson wrote the first Canadian play to have completed production at Toronto’s Royal Alexandra Theatre. Dry Lips Oughta Move to Kapuskasing, published in 1989.

Despite the fact that Highway is regarded as one of Canada’s most influential writers, both Highway and theater reviewers have recently noticed a considerable discrepancy between his renown and the relative rarity of his plays being presented by theater groups.

How Old is Tomson Highway?

Highway was born on December 6, 1951 (Age 70) in Northwestern Manitoba, Canada. Born to Joe Highway, a Caribou Hunter, and a Champion Dogsled Racer, and Balazee Highway, His first language was Cree, and he grew up in Cree traditions. He is related to Billy Merasty, the playwright/actor.

He graduated from the University of Western Ontario in 1975 with a B.A. in Music with Honors and in 1976 with a B.A. in English. He met playwright James Reaney while pursuing his degree. Highway served as a social worker on First Nations reserves all around Canada for seven years. In addition, he helped organize and create a number of festivals celebrating Indigenous music and art.

He got inspiration from these events to write novels and plays that gained him great recognition in Canada and worldwide.

He has not revealed whether he has children as he keeps his personal life private.

Tomson Highway’s net worth is estimated to be between $2 million and $5 million dollars. He has made a great amount of wealth from his primary career as a playwright.