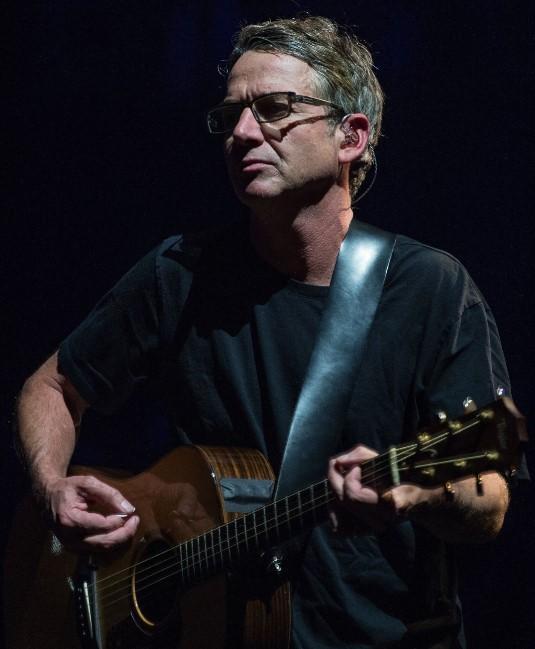 Stone Gossard is an American musician, a co-lyricist, he plays the rhythm and additional lead guitarist and he is one of the founding members of the American rock band Pearl Jam. Along with Jeff Ament, Mike McCready, and Eddie Vedder.

Gossard is notable for his work before Pearl Jam with the 1980s Seattle, Washington-based grunge bands Green River and Mother Love Bone. He has made contributions to the music industry as a producer and owner of a record label. He owns a recording studio. Stone has been a  member of the band’s Temple of the Dog and Brad. In 2001, Gossard ventured solo career and released his first solo album, Bayleaf. His second solo album Moonlander followed in 2013.

On July 20, 1966, the American musician who serves as the rhythm and additional lead guitarist for the American rock band Pearl Jam was born.

Have you ever wondered how tall Gossard is? According to our research, he stands at a height of 6 feet 1 inch.

He was born to a lawyer father David W. Gossard Jr. and a mother a city worker in the Seattle government Mary Carolyn Carpenter. He has two siblings, Star Leslie Dirette and Shelly Joan Gossard.

Gossard attended Northwest School of Art with his old Mudhoney bandmate Steve Turner (Green River). He joined Turner in his band The Ducky Boys. Turner’s interest in punk rock had a significant influence on Gossard and in turn.

He is notable for his hard rhythm style of playing, and his sense of beat and groove. His music style is influenced by Zeppelin, Kiss, Jimi Hendrix, and Van Halen, as well as funk and rap.

Gossard is known to use guitars such as a Fender Telecaster, a Fender Stratocaster, and a Gibson Les Paul.

He once said of himself: “I like rhythmic things that butt up against each other in a cool kind of way.” Vedder has been quoted as saying that it is extremely difficult to collaborate with Gossard. As he outright refuses to work on anything remotely like anything he’s done before.

Gossard has played mellotron, bass guitar, and resonator guitar as well as often providing backing vocals. He was given lead vocal duties for two of the Pearl Jam songs he had written both musically and lyrically: “Mankind” and “Don’t Gimme No Lip”.

Gossard is an American musician who has a net worth of $75 million. Also known as “Carpenter Newton” he built his net worth as a musician, songwriter, owner of a record label, and recording studio.

The band continues to be critically acclaimed and commercially successful – with more than 85 million albums sold worldwide. Eleven studio albums, hundreds of unique live performances, and the bootleg release of a live concert is on their website. Pearl Live concerts.