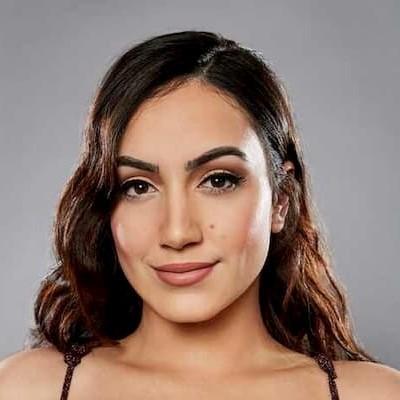 Maria Elizondo is American-Cuban, and a TV personality best known for appearing on the seventh season of MTV’s Are You the One? and Double Shot at Love.

She is Youtuber, her YouTube Channel which she started in 2014. Currently, it has over 27K subscribers. Maria’s oldest video dates back to November 2018.  When Are You The One? Season 7 finished airing on television

Also Read: Jenna Brown Biography, Age, Family, Are You the One?, Net Worth

Maria discusses topics including her 34-year-old ex, fighting a woman at a bar, and her casting experience for Are You The One?. In 2020 she opened up on her YouTube page. How she was sexually assaulted at work.

Elizondo was born on 2 Aug 1996, In Secaucus, New Jersey, US. She is of Cuban descent. Maria stands at a height of 5feet 7inches tall and weighs 54Kg approximately.

She prefers to keep her private life private. There are no details or news regarding her siblings or parents.

Maria Elizondo, Are You the One?

Elizondo appeared on MTV’s Are You the One? in season seven as cast. A dating reality show in the United States. That followed 22 singles cast living in the same house. They’re looking for their perfect match.

Contestants cast their votes for a couple to enter the Truth Booth. This is where they find out if they are a good match. Couples who have been confirmed leave the house and spend time alone in the Honeymoon Suite. Nonetheless, they attend every ceremony.

In the film Are You The One? Season seven? Shamoy is the ideal match for her. Shamoy did, however, admit to having a girlfriend back home, which upset Maria. Following the final ceremony. Maria eventually got together with another contestant, Kwasi Opoku.

From the start of Double Shot at Love, Elizondo quickly became a fan favorite. Because she quickly bonded with Vinny Guadagnino. Her connection with Vinny persuaded her fans that they could be a good match. Vinny surprised viewers in the Season 2 finale. When he decided to remain single.

What surgery has Maria Elizondo had?

In September 2020 Maria Elizondo, 25, performed the Brazilian Butt Lift (BBL). The procedure was done at The Bet U Now Plastic Surgery Center in Florida.

Maria told her follower that the main reason for her surgery. Was that the fat transfusion was to eliminate her insecurities.

A Brazilian Butt Lift contains fats that are extracted. From areas such as the buttocks, abdomen, back, and thighs by liposuction injected into the buttocks.

1 thought on “Maria Elizondo Biography, Age, Family, Are You the One?, Twitter”