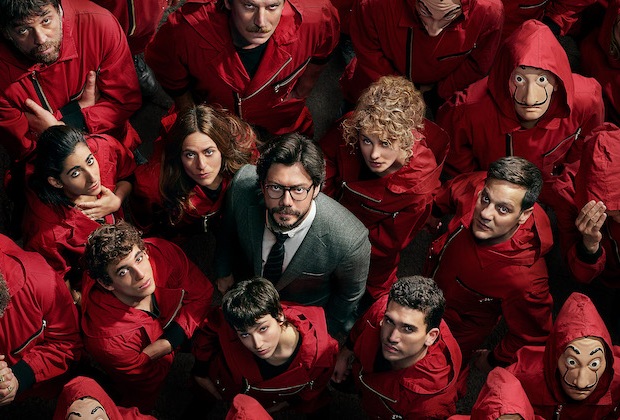 Lacasa de papel commonly known as Money heist depicts a story of a gang composed of differently experienced criminals. With each holding different specialties and capabilities. The 1st season shows their mission to rob the royal mint of Spain. By Occupying the mint and printing around 2.4Billion euros from the mint. Itself such a grand heist demands anonymity and disclosure of one’s identity.

Alvaro Monte Aka the Professor plans to go for a heist with a strange red costume and a mask. To hide the identities of his teammates from the police, media, and intelligence agencies. The attire used for the heist became famous and people around the world started considering it amusing. The costume became a trend for people to wear at Halloween and costume parties. Without knowing the real meaning of it.

The Red jumpsuit is the key motive of the heist. Red is a very common color used by revolutionaries and it shows signs of defiance. The red color represents Blood which symbolizes a sense of freedom and liberty. In the 1st season. The professor stated in a group meeting that the heist is an operation of resistance to the failed system.

Professor grandfather used to sing him Bella ciao song. Which they used to sing in the war against tyrants in Italy. Then professor taught the team the song as part of a revolution.

Bella ciao translates to goodbye beautiful used as a theme song for the show. Bella ciao is considered a historic folk song in the Italian language. Which was introduced around the 19th century to the labor class protesting against the tough work-life balance in Italy. The song became a symbol of resistance against fascism.

The mask is a perfect choice to be used for the purpose of the heist. Linking it to values tied from national history it is called the Dali Mask. Which is related to the world-known artist Salvador Dali.

In the 1920s Dali was widely known for his bizarre and bold art, he had a pure revolutionist mind.

At a young age, Dali was known for being an anarchist and a card-carrying communist. His political beliefs altered with time he matured.

In his youth, Dali used to be a fierce extremist and backed up the dada movement. Which was initiated in Zurich Switzerland in the early 20th century as an objection to a novel capitalist regime.

Money heist Director used the same mindset as Salvador by pinning a face mask to the costume. Linking it to a revolutionist school of thought.

All Dali’s beliefs are aligned with the professor’s in the money heist. The mask is a rough sketch of how Salvador Dali looked like and his famous curled-up mustache.

In season three Alvaro Mota disclosed that the aspiration is resistance against the capitalist ecosystem.

The red costume is commonly used around the world for anti-capitalist campaigns. For instance Colombia, Rio de Janeiro, Rome, Buenos Aires, Hamburg, Saudi Arabia, and Paris.
Since money heist does not base on a true story the professor’s statement was completely random.

Protest around the world has been using the Red jumpsuit and Dali Mask.